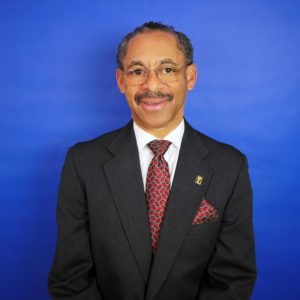 Dr. Brooks is Medical Director, and past Chief of Pediatric and Adolescent Medicine at Watts Healthcare Corporation in Los Angeles, where he also serves as the Medical Director of the Jordan and Locke High School Wellness Centers. He is also a Medical Director for LA Care, one of the nation’s largest Medicaid managed care plans. He holds staff appointments at Centinela Hospital in Inglewood, where he was Chair of the Peer Review Committee and at Martin Luther King Community Hospital in South Los Angeles, where he is Vice-Chair of the OB/pediatrics department and a member of the Executive Committee. He is Chairman of the Community Clinic Association of Los Angeles County, a consortium of 30 community health centers in the southern California area.

Dr. Brooks is President-Elect of the National Medical Association (NMA), and is the immediate past national Speaker, House of Delegates. He also previously held the NMA positions of Vice-Speaker and Secretary, HOD, and Chairman of the Constitutional and By-Laws Committee. He has also been President of both the Golden State (CA) Medical Association, and the Miller-Lawrence Medical and Dental Society.

Dr. Brooks is Immediate Past President of the California Immunization Coalition and Chairman of the Immunize LA Families Coalition. He is on the national Leadership Panel for the Adolescent Immunization Initiative (AII), which advocated successfully for adding a column on
the Advisory Committee on Immunization Practice’s (ACIP) CDC yearly vaccine recommendations in 2017. He is often requested to speak to the media on issues related to immunizations and advocates for reduced disparities in immunization rates among disadvantaged communities. He is also frequently asked to speak to physicians and other groups on the science and the implementation perspective of vaccine utilization.

In 2018, Dr. Brooks was honored by the National Council of Negro Women, Long Beach, for Outstanding Service to the Community, and included in the 2017 Wall of Excellence for Medicine, for Long Beach Black History Month. He was honored as one of the Top Blacks in
Health Care, 2019, by blackdoctor.org. He is past president, Long Beach Museum of Art’s Board of Trustees. He is a member of the fraternities, Kappa Alpha Psi, and Sigma Pi Phi (the Boule). He is married to his wife of 32 years, Lisa, and has two children, Alana and Joseph.